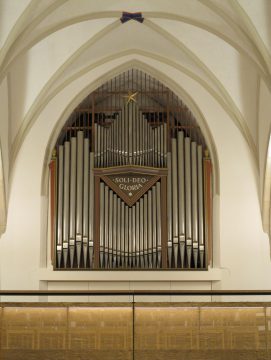 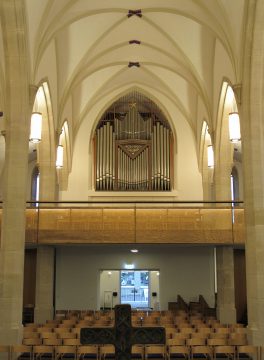 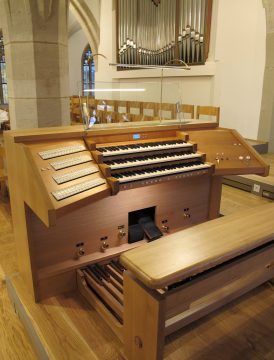 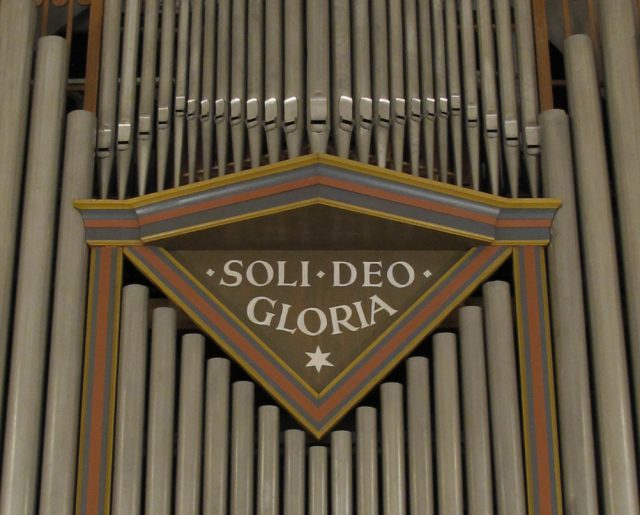 The organ of the „Stadtkirche“ Vaihingen has a varied history. The most important stations are to be outlined with the works of the organ builders Schäfer (1860), Weigle (1946), Walcker, Plum and most recently Mühleisen (1997 / 2018). The organ stands in the tower room and has cone and slider chests and plain electric action .
In the course of our work on the instrument, accompanied by Prof. Volker Lutz as OSV, the wind system had to be fundamentally improved. The new console with electronic PLC system was delivered and installed. On top a pre-set combination system and octave couplers were added. The pneumatic slider action parts were replaced by magnets, the electrical system of the organ was upgraded according to the current guidelines. The two cone chests in Positive and Pedal were electrified as a single-tone chests, which made it easily possible to gain more meaningful stops through programming: in the Positive Spitzflöte 8′, Principal 4′ and Rohrschalmey 4′ (the latter was originally available and had been moved into 8′ in the meantime); in the Pedal there is a trumpet 8′ now and a mixture, which is composed of Positive stops. The bottom octave of Quintade 16′ in the swell is electrified separately, so that it can complete the 8′ range to C as 16′ when using the suboctave couplers in Positive and Swell. The sometimes very heterogeneous pipe stock was finally voiced very carefully.