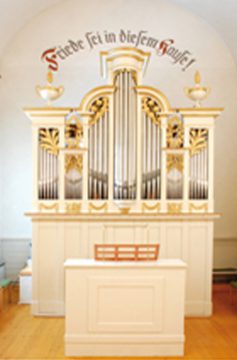 Major Maintenance, with all extra works

Repair of the case

Exposing of the paint filled front fillings of the lower case, that have been painted after 1981 (access to the manual-roller board), the board in front of the manual bungboards and of the keydesk lid including all painted screws. Time-consuming clearing away of the coats of paint and colour scab formations in fillings and coverboard.
Glue of loose case parts. Postfit from doors and flaps and repair of the door locks. Removal of vibration noises in the organ case by attaching of felt inserts and wedging of glued in fillings of the pedal frame.

The restoration of the veil boards, vases and the decoration as well as the gilding in the cornices occurred through certificate restorer Annette Kollmann from Warmbronn.
The new coloring of the case occurred through painter and restorer in the craft Michael Wachsmuth from Leutenbach.

Repair of the wind system

Complete exchange of all leather parts of the magazine bellows from 1933. This had been moved from the choral loft into a space beside the sacristy in 1933 by Friedrich Weigle. In1953 and 1981 some leather parts have been repaired. Above all the incidence of light through the south facing window had destroyed the leather over and over again. Therefore, on this window (and also on the choral window lying behind the organ) a UV protective foil was drawn up what was produced by the municipality in own contribution.

Partial exchange of the leather „pulpeten” in manual and pedal wind chests. Brushing off and impregnating all Pulpeten by massaging in a special paste on spirits of turpentine base with regenerating qualities resistant to mould. Gluing of cracks in the manual chest. Repair and renewing of the graphite on the felt rings built-in in 1981 instead of Schmidrings. Correction of the slider positions. Cleaning of all keyvalves and equalling the pallet springs. Re fitting and putting on fresh Talcum on the bungboards. Sound-wise checking of channels and wind trunks on wind density.

Repair of the stop action

Examination of all squares and rollerboards and new regulation on half motion. Loose regulating nuts were substituted, original ones were left and protected by a second leather stopper.
Examination and equaling of gaps in slider action, stop rods and connecting action parts. Removal of action noises.

Repair of the tracker action

Reduction of the transversal slack in the not garnished guidances of the manual keys by gluing in hard paper with hide glue. Renewal of the leather hats in the pins of the manuals. Renewal of the key felt.
Renewal of the lateral decoration of the pedal keys from sheep leather against those from thin cowhide. Reworking of the rear key pivitpoints. Supplement of the broken edge in the pedal frame according to existing model. Matching the colour wear coming from the too narrow organ bank on the sides of the pedal frame. Reduction of pedal key movement. / dip
in the poster stoppers because of wear of the “Pulpeten” of the pedal pallets. Replacement of the worn pin coversfrom sheep leather against cashmere upholstery with cowhide covers. Attachment of a poster upholsterer under the pedal key springs damp the noises.

Repair and re-voicing of the pipe work

Renewal and re forming of the foot ends of 8 ‘-façade pipes Gamba C – Fs that have been deformed by material fatigue and soldering of supporting constructions from brass.
Form out of dented or non circular pipes. Attach from supporting seams at Gamba 8′ from c” and Biffra 4′ from g’.
Readjust of the stoppers of Gedackt pipes.
Removing the oxide layers in the reeds and tuning rods of the Posaune 16′. Attach of a rack support for Pos.16′ b ° and c’.
Postpolish all façade pipes with whiting / precipitate chalk.

Thorough, compensatory re voicing of the pipes, in particular of the basses of open 8 ‘stops on basis of the existing sound frame. Adapt of the very noise-emphatically voiced façade stops built-in in 1981, Matching the Principal 4′ in the sound to the remaining pipe continuance.
The temperament did not happen in 1981 equal, but to Kirnberger III on a vocal pitch of 440 hertz with 18 °C. A re-tuning to equal temperament would have meant either a rise of the vocal pitch by at least 14 cent or 3.5 hertz, or an addition to the pipe lenghts of numerous metal and wooden pipes (!) what was rejected for financial reasons. The decision fell on a moderate temperament(Janke III) with only a slight rise of the pitch and the narrow string stops Gamba 8′ and Biffra 4’ (-20 or-22 HT after Töpfer NM) were equipped in the bass and in the middle with “Stimmanschetten” / (tuning additions, that are only wrapped around the outside of the pipe).

Installation of a removable music rack and lighting

Because the available music stand was not sufficient for two books lying side by side, one had created a though practicable, but by no means aesthetic solution in the form of a bent aluminium metal which unfortunately caused wear on both sides. Therefore, a new solution was aimed in open frame construction method which adapted itself in the available continuance. It offers the necessary place, and mediates in its implementation in beam-tree a craft aesthetics.
As a music stand lighting a special manufacture of the Fa. Knöchel was built in. It enables the removal and/or closing of the key desk lid. The circuit of this lamp was coupled with the discreet engine-pressure tracer built-in in 1981.

Installation of a key heating and a pedal heating

To allow the organist practicing also in the unheated church, a self-regulating manual key heating of the Fa. Knöchel was inserted under the key poster felt. Under the pedal keyboard a pedal heating system of the same company with special scales was installed.

Delivery of an adjustable organ bench

The still available original organ bench had been obviously too high to smaller organists, and had been shortened in own initiative accordingly. Besides, it was overlooked the fact that by sawing off, the width necessary for the pedal keyboard was not given anymore by the trapezoid-shaped construction of the bench. Subsequently the bench got stuck, and could not be shifted any more. Also the colour was worn on the keyboard frame. The original bench is kept and serves as a filing possibility. Now it is replaced by an adjustable organ bench in massive oak.