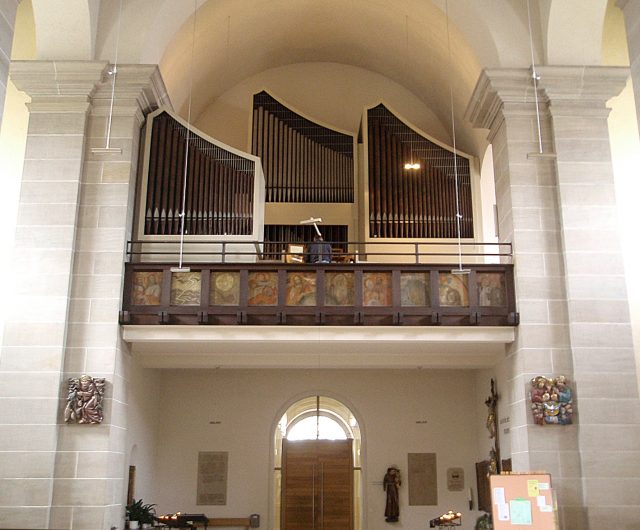 Carried out technical works of the organ revision in 2013:
Cleaning and partial releathering of the bellows,
Overhaul of the keyboards,
Overhaul of the electric stop induction motors,
Installation of a new modern electronic combination system
Installation of a new key action
Replacement of the hardly effective glass swell shutters by the new building of a swell front with thick walls
and 2 rows of shutters that can either work separately or together (2 pedals)
New building of the back wall of the swell with new accesses and doors for better tuning
New and widened walkways and reorganisation of the vertical accesses
New positive side wall with tuning door and side shutters to adjust the spatial hearing in the direction of the console

Changes in Disposition:
Great
New Gamba 8’, omission of Cymbel.
Separation of Mixtur in Octave 2’ and Mixtur (by means of a pre lever system), replacement of the Octave 2’
by a Quinte 22/3’

Positive
The „fluty“ Holzoctave 4’ was changed into a Holzflöte 4’ and the metal pipes were re-racked in the treble
Omission of the Klarine 4’, instead installation of a Rohrschalmey 8’ that was already stored.

Swell
Separation of the double Schwebung in Salicional 8’ and Schwebung
Separaton of Cornettino in Nasat and Terz
Installation of Klarine 4’ from Positive and omission of Harfenregal 4’
Reorganisation of the 4’-Principal position, Gamba 4’ from Positive into the swell as Fugara 4’, the narrower
Principal 4’ from the Great into the Positive
And the wider Octave 4’ from Swell into the Great.
Various reductions of the multiple stops in each division, connected with a lowering of the mixtures or making
them more bass oriented. (e.g. the Great treble with 8’ choir etc.)