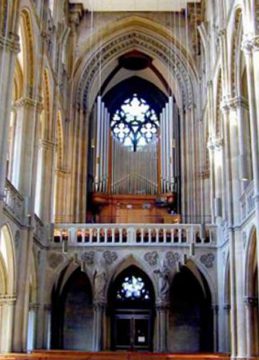 build by Friedrich Weigle; in care of our company for more than 20 years

On April 30th in 1876 the church St. Johannes was inaugurated. The church is located near the “Feuersee” a little “fire water” lake downtown. It turned out to be the masterpiece of the builder, Christian von Leins. It was the first church to be built in Stuttgart after the reformation. The building lies very impressively on a peninsula near the waterside of the lake. The building officer designed it as an early gothic cathedral with fine articulated shapes that were used in the “High Gothic period. Unfortunately all the windows, the roof, arches and the spire were destroyed during World War II.

The organ in St. Johannes

•     All necessary work on pipes, action and case parts

•     Checking and regulation of the pneumatic chest relays
•     Replacement of all leather membranes located at the boards underneath the cones.

•     Installation of a BUS Pre-set combination coupler system with 14336 combinations in 7 blocs. The design of the key desk remained the same, only the free combination set switches were removed. They have been kept and stored in an archive as were the old cables.
•     Cancel button for each division (Windladenabsteller). That way, only chests with pulled stops are pressured. That way, unnecessary noise and wear is limited. The electrical current supply of each chest is individually separated and fused. Hence, it conforms to the latest safety regulations. The old wiring harnesses were kept. All electr. switches and magnets for the chest relays and the stops had to be regulated and set.
•     Additional 2 octave couplers: III / P 4’, III / III 16’
•     Renewal of the three manual keyboards.